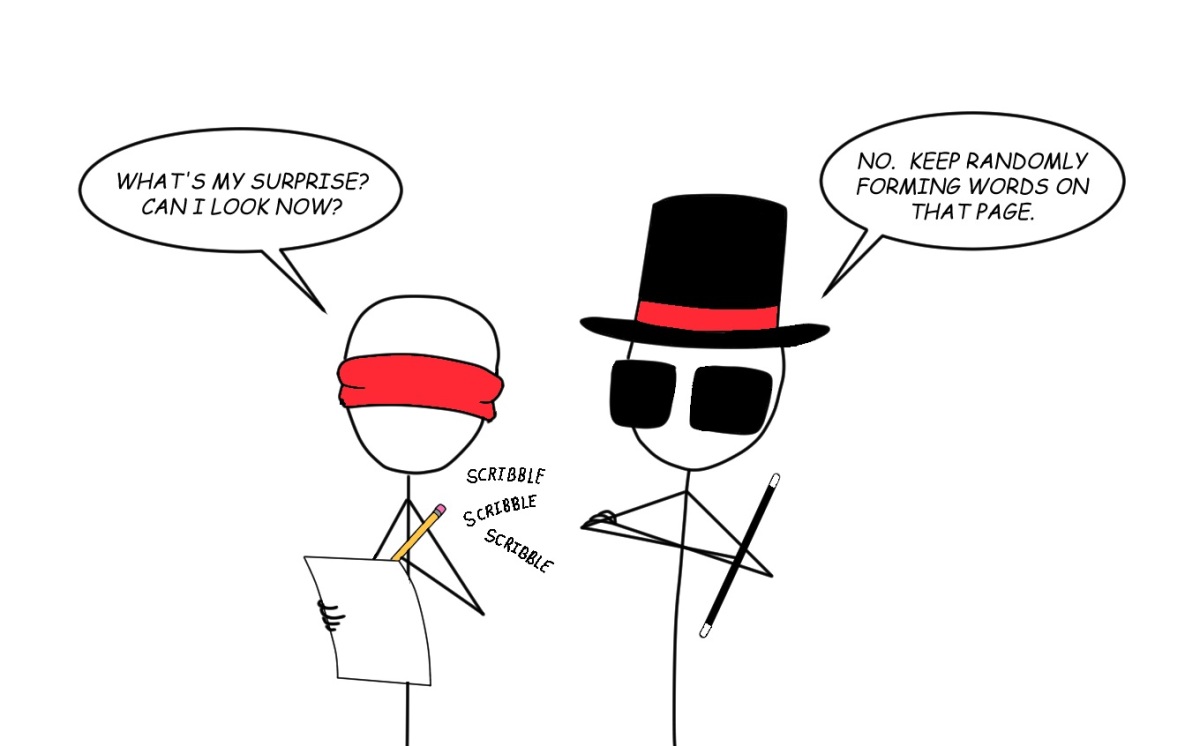 Not cooperating with yourself?  No worries.  Here are some tips on how to trick yourself into spilling some productive word wizardry.

What’s That Over There?!

When the usual writing methods aren’t working, the next logical step is to look at the unusual methods.

Ever thought about writing your project backwards?  Why not?  How about from the middle onward, in either direction?

Write it in epistolary form, as a series of letters and articles.

Scribble it out in permanent marker on your sister’s arm while she sleeps (which I’ve never done before.  Honest.)

Write it on napkins.  In crayon.

How about in haiku form?  Or as a dinner recipe?  How would you even go about doing that?  Go on, give it a shot.  Experiment.  You’re already not writing.  What’s the worst that could happen?

Once, after a particularly shitty writing session (or an attempt at one), I gathered up my rebellious characters and dropped them into a brand new project.  This was not a serious project.  It was just me messing around, making a slapstick parody of the story I was actually trying to write ~ looking for a way to entertain myself after spending so much time wandering the desert of writer’s block.

I was bored.  I wanted some fun.  I figured running my creations through a mock story would suffice.  After all, what did I have to lose?

Well, dignity, for one thing.  It turned out to be an incredibly stupid story, which was sort of the intention, I guess (though you always enter free-writing with the vague hope that somehow, through letting go, you’ll create the Mona Lisa of word wizardry).

I received an unexpected result, though: my stupid mock story revealed some incredibly un-stupid things about my characters and the actual story they were meant to star in.  I beat the block, and all by taking a frolic through the foolish for my own amusement.

The next time you’re blocked, have a little fun with your writing.  Take it out for a wild night on the town.  Who knows ~ you may trick those exhausted writer muscles of yours to produce something of quality in amongst the crap you know you’re gonna spew.

Wait, There’s Nothing Up My Sleeve…

Sometimes your brain is too stubborn to put words together.  Like, ugh, who made you king of the toadstools?  You can’t tell your brain what to do!  He’s capable of making his own decisions ~ and yours too, while he’s at it!

At this point, distraction is key.

Do a crossword puzzle.  Play solitaire.  Do that really difficult numbers game that I’m horrible at and, as a probable consequence, can never pronounce.  Sa-doo-ko?  Soo-doo-koo? *Looks up pronunciation* Soo-do-koo.  Sudoku.

In other less terrifying words, give your writer muscles a break and go do something else for a while.  Hand your brain a different chew toy to gnaw on.  It may persuade him to behave better at the next writing session.

Just don’t get too caught up in any of these other activities yourself.  I use music to get my creativity flowing again.  Nothing wrong with that.  In fact, my current set of characters are music gurus themselves so, in a way, I’m doing research!  Totally fine!  But one song leads to another and nine in the morning becomes nine in the next morning and, dammit, I really hate it when that happens…

Distract your brain.  Not yourself.

…So Where the Hell is the Dove?!

I’m a firm believer that there’s only so much creative energy in any given area, and that the energy can eventually be used up.  Kind of like farming, right?  You can’t plant one kind of crop in the same field year after year because all the nutrients for that crop will get eaten up.  You need to bring in some other crop to eat up other nutrients so that the nutrients for the first crop just, what…grow back?  That’s how farming works.

*clueless city boy, who really does live in the middle of farming country for some inexplicable reason, looks around for validation*

Whatever.  My theory doesn’t change.  If you sit in the same spot every day, chipping away at your project, you’re gonna use up all the creative energy floating around there.  You gotta get up off your ass and move elsewhere.  Across the room, even, which is what I typically do.  Or, if you’re feeling adventurous, you can journey outside.  Find a nice patch of grass to sit down in.  Or look beyond even that ~ at coffeehouses and bars and whatever else is out in the world.

The amount of creative energy out there, divided by the number of writers and other wielders of creativity, means that everyone is granted… let’s see… uhmmm… five hundred square feet of creative area a day!  Or is it five thousand?  Or is it fifty?  *checks math*  *remembers he’s bad at math*  *tosses math*

Whatever.  There’s room to roam.  So get out there and roam.  A change of scenery may confuse your brain ~ who really doesn’t like change.  He could end up so upset that he accidentally throws up a little.  And hopefully what he throws up is something of the creative nature.

Ta-Da!  It Was in Your Ear All Along!

Warning: this one requires a considerable amount of self trickery.  It requires that you gain enough mental control as to literally split yourself into two beings, with one half being slightly less aware of what the other half is doing.

What you’re going to do is a little like trying to tickle yourself ~ which is totally possible, just so you know.

Approach your project like you have an idea.  No, seriously, you do!  And you’ll prove it.  You’re going to type it down right now.  You’ve got the mother of all inspirations.  There’s a fog of creativity somewhere around here, and you just breathed that sucker in!  THIS IS NOT A TRICK!  You know exactly what you’re doing.  So you’re going to do it…

A little confidence (feigned or otherwise) goes a long way.

Cedillo is the pen name of a writer who hasn’t had the guts to tell his family that he’s a blogger yet. He lives in the American Midwest. He has a bearded dragon named Rooney. He’s been writing stories since he was five years old. He is also a girl. View all posts by Cedillo

Can I help you?